Bela Benova is once again a guest of our blog – with yet another fascinating tale about the lighthouses guarding the Bulgarian Black Sea Coast. Join us on a walk to the South and dive into a story about towering lights, an entertaining sail and even a few messenger pigeons…

The Lighthouses Of Burgas & The Bulgarian Black Sea Islands 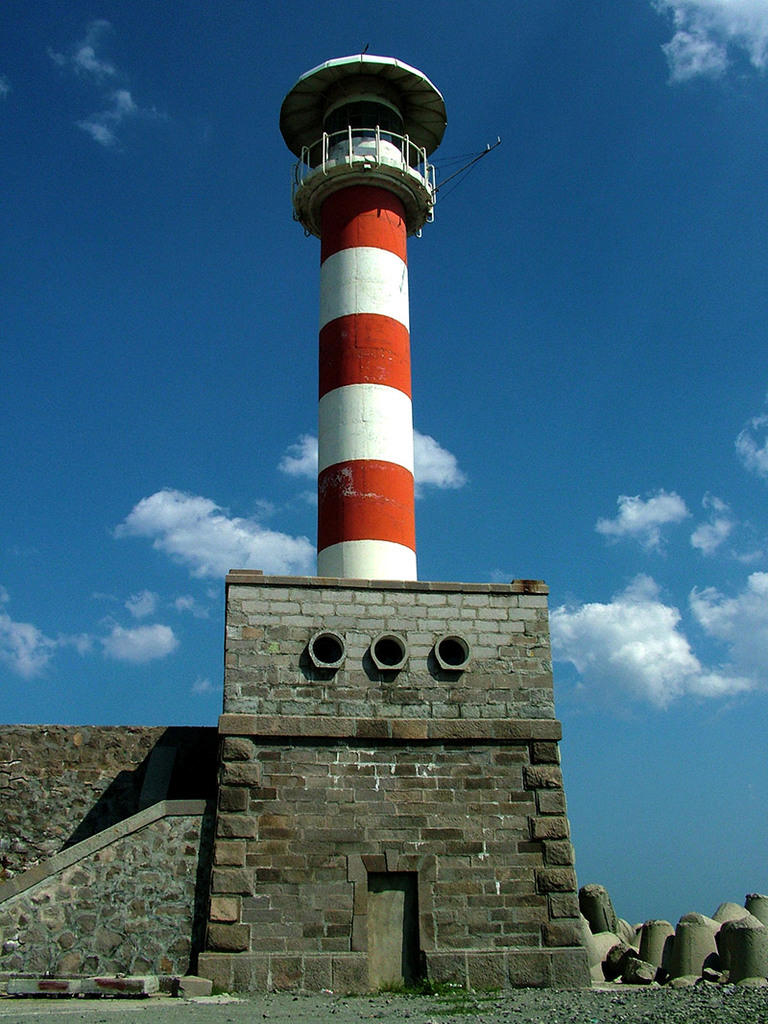 The lighthouses of the southern Bulgarian Black Sea coast, as well as its islands, fall under the jurisdiction of the Burgas Navy Headquarters. There are no artificially created islands along the Bulgarian coast, but there are two lighthouses on the two biggest islands – Saint Ivan and Saint Anastasia. An automatic lighthouse warning about shallow waters is also placed on the reef south of Pomorie. 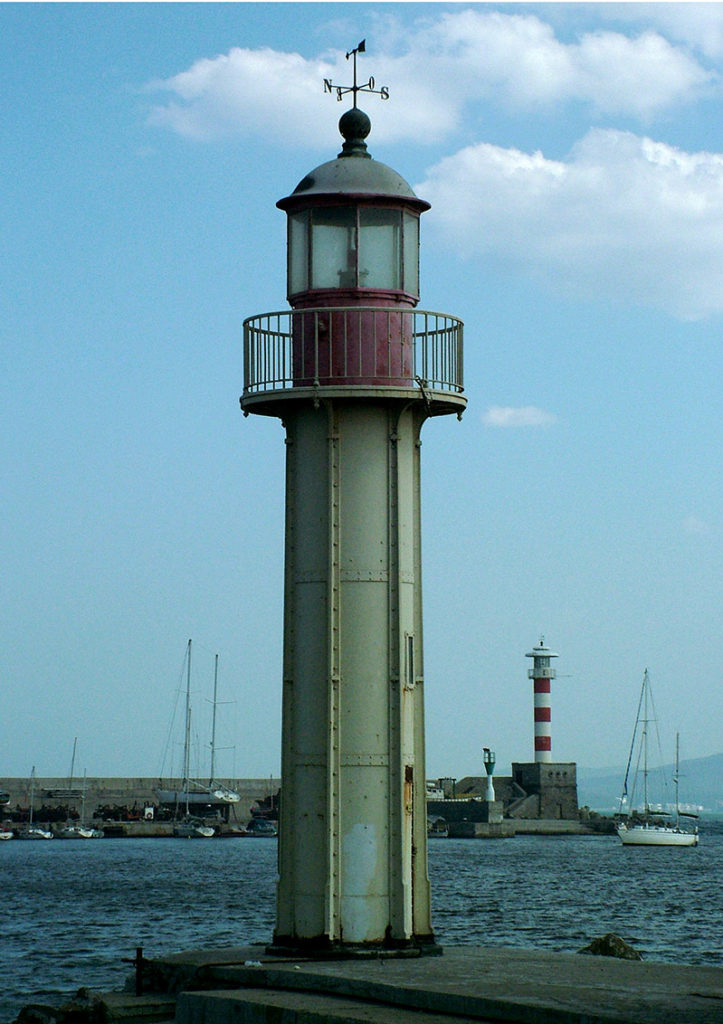 During my bike journey to discover Bulgarian lighthouses, described in my book “Following The Pulsing Light”, I had the opportunity to visit the navigational aids in the biggest Bulgarian port – Port of Burgas. You can get a permit for such a visit from the press centre of the port. The breakwater lighthouse, with its height and elegant white and red stripes, is a key part of the identity of the city. 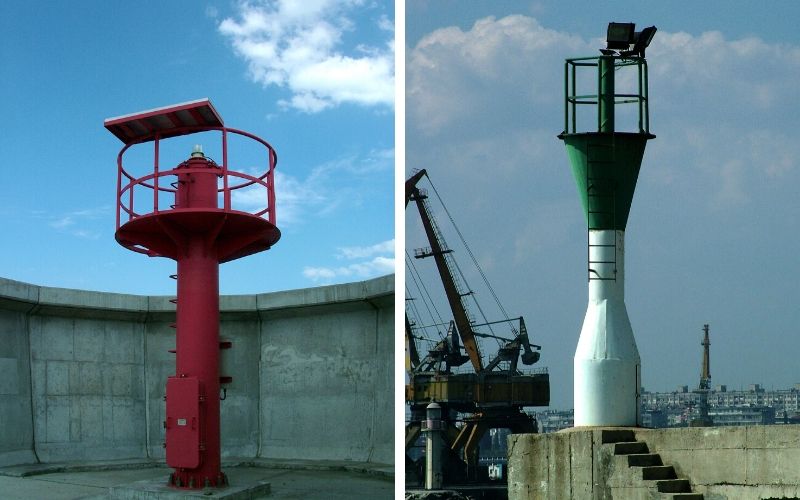 Navigational aids at the passenger terminal and the yacht port, Port of Burgas © Bela Benova, September 2007

In 1888, the National Assembly of the Republic of Bulgaria voted to create a law regulating the construction of ports in Burgas and Varna ports. The main lighthouse in Burgas was erected in 1899 at the end of the eastern mole. Just like the Varna’s breakwater lighthouse, this one also bore the name of Georgi Dimitrov, and a bas-relief with the face of the communist leader used to embellish the facade facing the sea. A few years ago, it was replaced with an emblem – the symbol of Burgas. To warn seamen during low visibility conditions, a nautophone was also installed at the lighthouse. 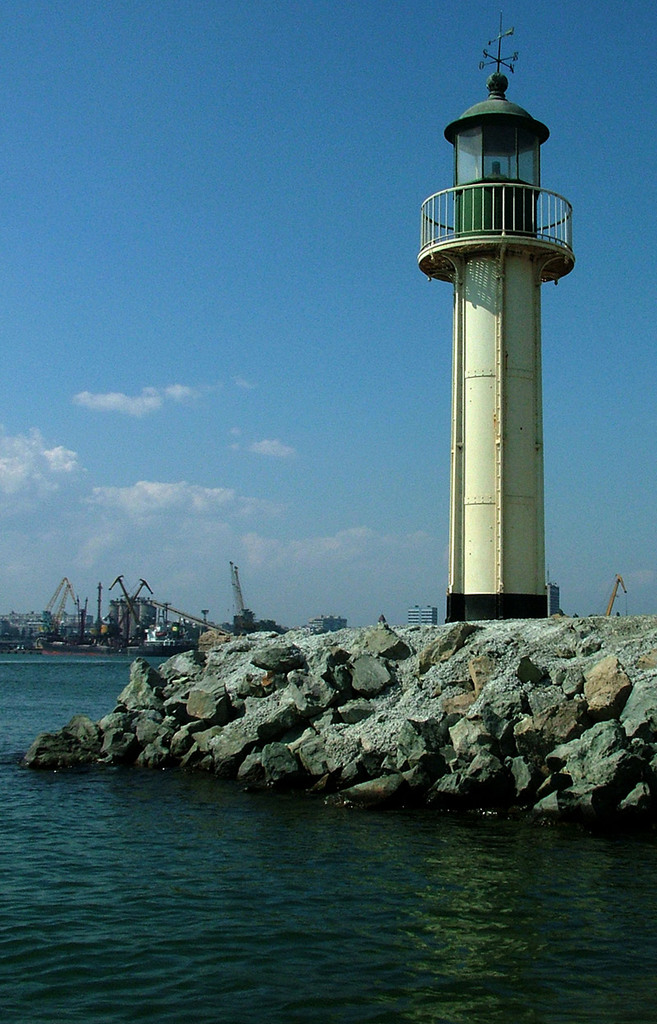 Near the breakwater lighthouse are also the towers of the green and the red entrance navigational aids placed in 1900, identical to these in Varna Port. One of the newest acquisitions of the port after its recent expansion is a high breakwater farther away in the sea, at whose end is the “Japanese” lighthouse – a modern, automatic navigational aid, powered by solar panels. 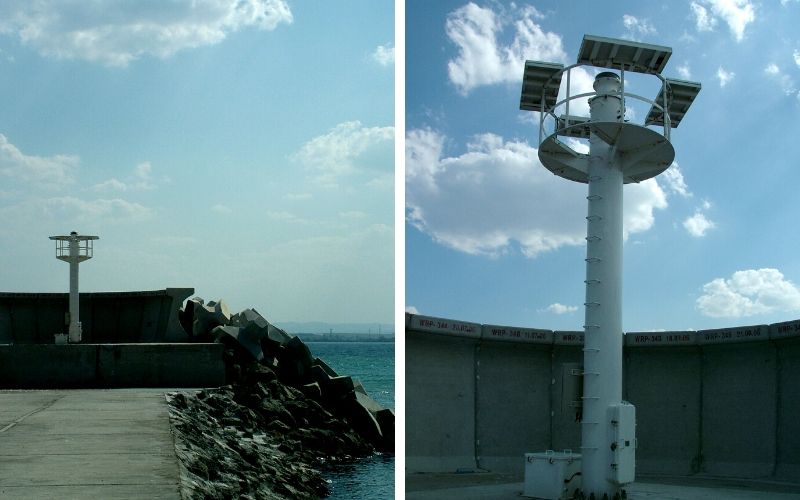 Navigational aid at the shipyard and the “Japanese” lighthouse, Port of Burgas © Bela Benova, September 2007

There are also a few smaller navigational aids placed on metal rods or constructions, catering to the different zones of the port complex – the old fisherman’s pier, the passenger terminal, the shipyard. A few of them use solar energy, too. Near the gate that limits access to the port, I found another construction that surprised me – not a working navigational aid but rather a monument shaped like a lighthouse. 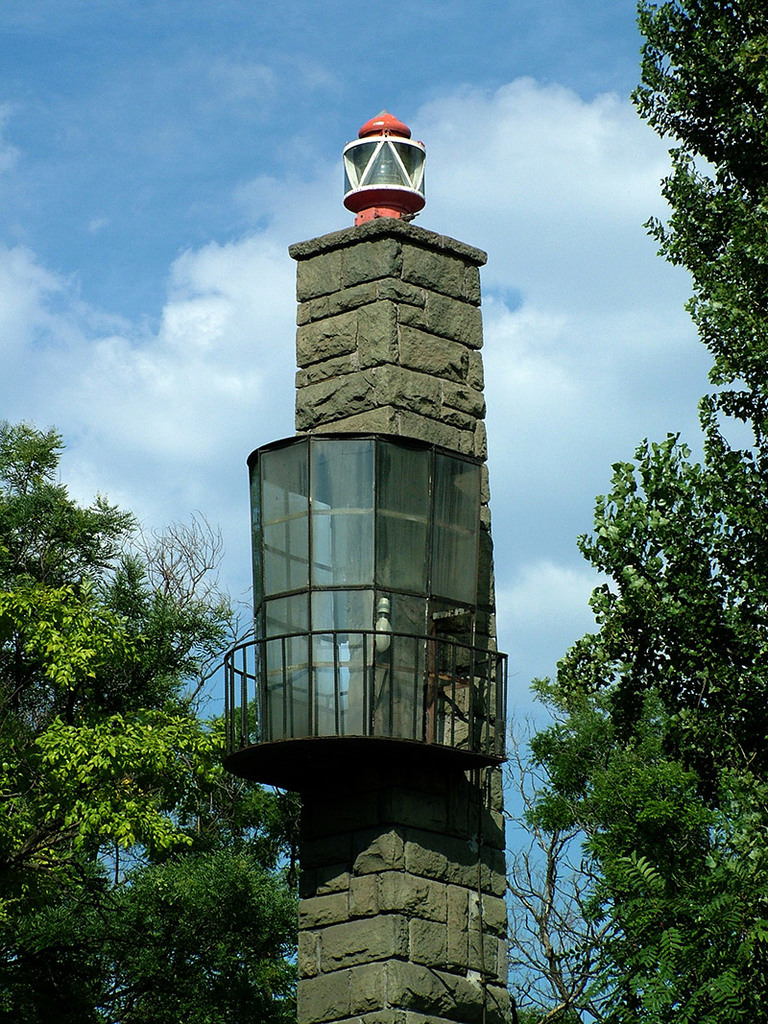 Saint Anastasia is an island located in the Burgas Bay area. It was named after the only island monastery in Bulgaria – Saint Anastasia The Healer, built in the Middle Ages and shut down after the Liberation. Rumours have it that the last abbot of the monastery sold the church utensils. In 1923 the buildings on the island were turned into an improvised jail, from which forty-three political prisoners escaped in 1925. In 1941, the government turned the island into a concentration camp and later renamed it to Bolshevik. In 1967, Saint Anastasia island was proclaimed a historical sight. 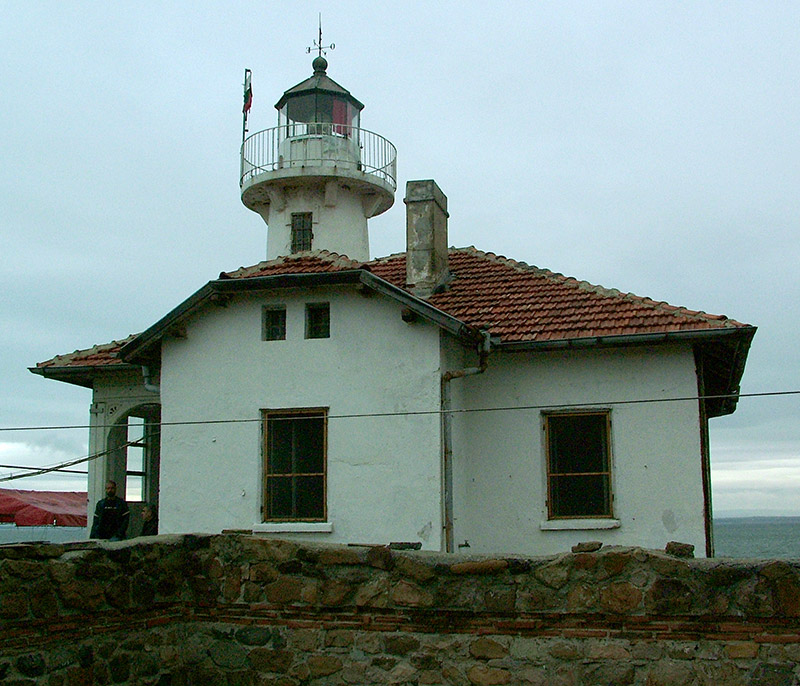 When I visited the island during the summer of 2007, it still wasn’t open to the public – a military boat from the nearby Atiya base was changing the lighthouse keeper on duty and I “hitched” the ride. Nowadays, the island is a tourist sight and there are regular boats to and from during the summer season. The lighthouse remains a military zone and is closed to the public, but it’s visible and can be photographed from the island itself.

The first evidence of a navigational aid on the island dates four centuries back. Different constructions and lanterns served their time before the aid was modernised and the first optics was installed in 1888. On June 13, 1914, the current lighthouse tower was deployed. It was identical to the old tower at Cape Galata, and the tower at Saint Ivan Island. 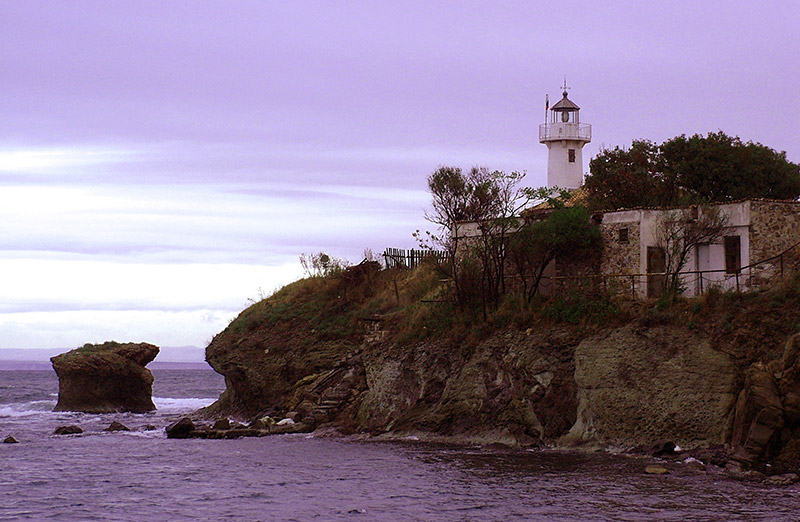 My visit to the biggest Bulgarian Black Sea island turned into a whole adventure, as there is no regular transport and tourist boats making panoramic cruises around Sozopol are not allowed to dock. Taking the risk to become a trespasser if I stayed on the island during the night, I managed to visit one of the most interesting Bulgarian lighthouses and to meet its inhabitants. Apart from the keeper on duty, I was met by the German Shepherd Freddie. Later on, I found out that there are messenger pigeons in the yard of the lighthouse – some of them had even won awards at international orientation competitions. 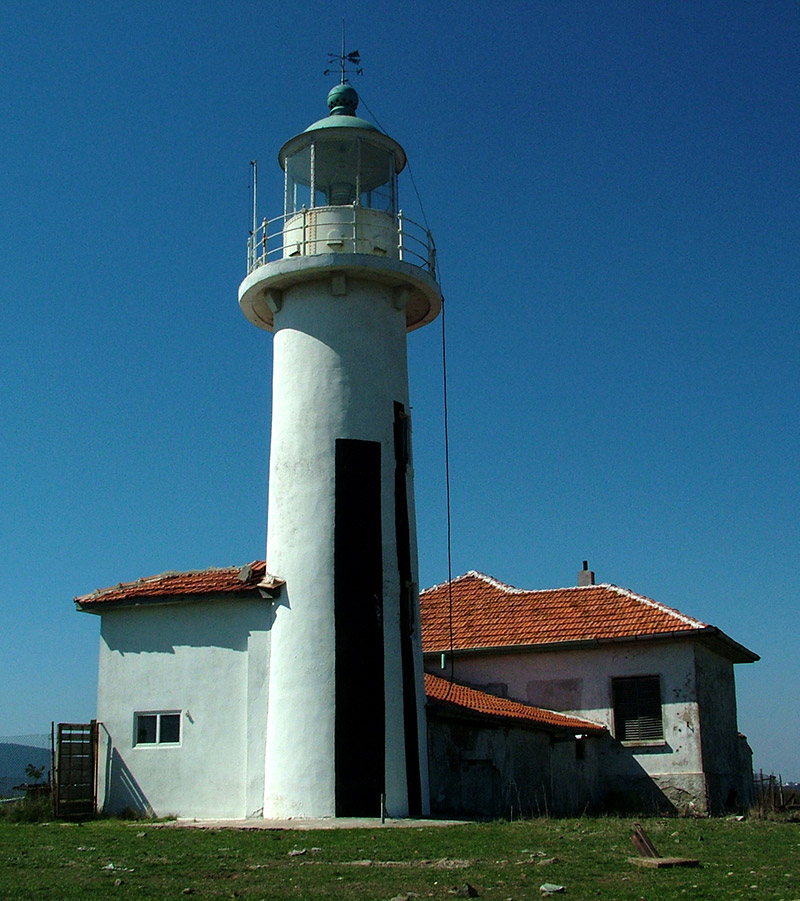 The lighthouse keepers are still living in the buildings from the time of the first lighthouse from 1888, while the current navigational aid was built in 1911. Close to the lighthouse, there is a nautophone resembling a bell tower, as well as a well that’s still being used as a back-up water supply in times of drought. To my surprise, I found the remains of what seemed to be a winding stone staircase around the well. From the lantern room, I saw the remains of ancient sanctuaries. The wooden cross erected to commemorate the Russian soldiers who had fallen on the island was sadly lying broken on the ground. Nowadays, Saint Ivan Island can be visited by civilians. The lighthouse in its highest point can be seen and photographed up close. The pier, sheltered from wind and waves, allows little boats to dock. It’s forbidden to stay on the island during the night, though.

It was an even bigger challenge to photograph the lighthouse of Pomorie because of the distance of a few cable lengths that separates it from the mainland. We used a small sailing boat for the purpose, and I – even temporarily, was part of its crew. It was the first time I sailed a small boat and, as with any other going at sea, ours had its amusing and critical moments. While we were manoeuvring our way out of the small bay we managed to drop one of the fenders, and the sharp turn we did to salvage it was nearly enough to throw me overboard. On several occasions, the minimal crew was tacking too laggardly for the quick orders of the captain. Then, we had some badly met waves, spraying our smiling faces while I was lamely trying to hold the tiller. We also enjoyed a few long minutes of silence during which we could hear nothing but the wind rubbing onto the tired mainsail… And we were there, in front of the lighthouse – covered in white foam, with no land to break the unending blue of the horizon. Soon, this line assumed an angry hue, a storm was brewing and forced us to seek the safety of the land as soon as possible. 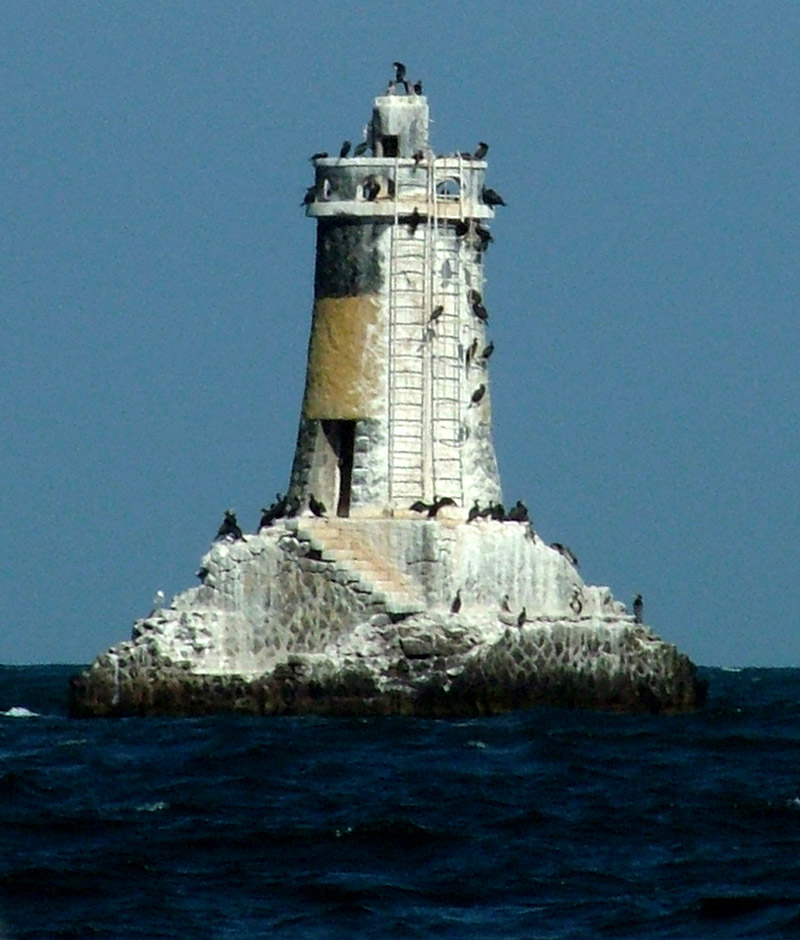 The beautiful and strong tower was built in 1933 on a platform of two stone blocks. The gas optics was replaced with an electrical one during the 1960s, and nowadays the navigational aid is automatic – turned on by a photo-sensor, it’s powered by accumulators. This is the only lighthouse on our Black Sea coast so deep inside the sea and left to battle the forces. I wonder what it would have been if this lighthouse was manned – just the thought of the fierce might of the sea is scary enough!

The fact that lighthouses fall under the jurisdiction of the Navy defines what type of people will be appointed lighthouse keepers. Most likely, people who have experience at sea, who have served the military, with serious technical knowledge, and – last, but not least – who can stand the test of being alone well. Of course, lighthouse keepers are not hermits, but access to some of the navigational aids can be difficult due to geographical and infrastructural reasons, and sometimes the weather simply doesn’t allow the new keeper to change his comrade after a long and exhausting duty. This requires them to be calm, patient and wise. You can find some curious stories of lighthouse keepers and their lighthouses in Milan Asadurov’s materials, which inspired me to begin a journey to photograph hundreds of lighthouses in my travelling exhibition “Home of Light”.