It’s time to take the final leg of our journey to the lighthouses of Bulgaria. Our host, Bela Benova, is here to take us to the navigational aids located in the southern shores of our Black Sea coast…

The Lighthouses Of The Southern Bulgarian Black Sea Coast

The two centres responsible for the sea lighthouses in Bulgaria are in Varna and Burgas. All navigational aids south of Saint Atanas up to the river Rezovska, including those on islands, are under the jurisdiction of Burgas. Most of the lighthouses are located on breakwaters and other spots where people can go freely. As is the case with some of the lighthouses on the Northern Black Sea coast, those that are located on the territory of military bases make an exception. 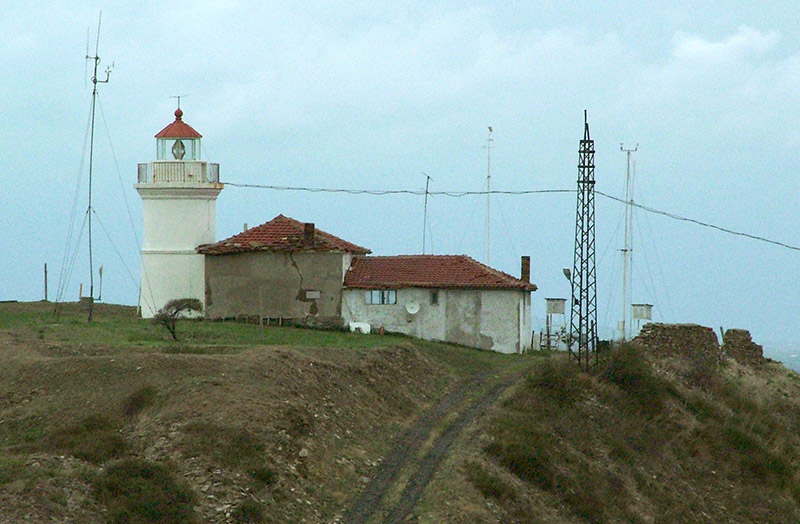 One of the most difficult to access Bulgarian lighthouses is the one on Cape Emine. This is due to the relief – at the easternmost cape of Bulgaria, the mountain range Stara Planina meets the sea in a series of steep rocks and screes. Maybe because of this raw natural beauty and the difficult road, this became my favourite spot from the whole bike journey following the pulsing light. The lighthouse at Cape Emine is not easy to photograph for yet another reason – the fence of the military zone extends almost to the steep rocks themselves, and navigating around it with the heavy winds typical for this place can be quite dangerous.

There is a meteorological station in the military base – for the lighthouse keeper, the close proximity of the meteorologist on duty is welcome as even the harshest weather is more bearable when you have company. The lighthouse at Cape Emine is one of the oldest in Bulgaria, deployed on 15 December 1880. During the sixties of the 20th century, additional living quarters were built and the lighthouse began running on electricity. The keeper on duty shared that journalists, photographers and filmmakers often visited – intrigued by the combination of lifestyle, stunning landscape and the lighthouse.

During my visit to Nesebar, I was amazed by the contrast between the two navigational aids – the old lighthouse, romantically blending in with the surrounding architecture and the bland metal construction of the new and currently working navigational aid. The old tower, identical to the ones at Cape Saint Atanas and Cape Maslen, was built from hand-hewn rocks and was deployed in 1932. The construction of the breakwater in 1954 rendered it useless and the tower was left to decay. The new light is a simple lattice construction which was moved to its current location after the breakwater was extended in 1978. Nowadays both navigational aids are accessible to be photographed up close. 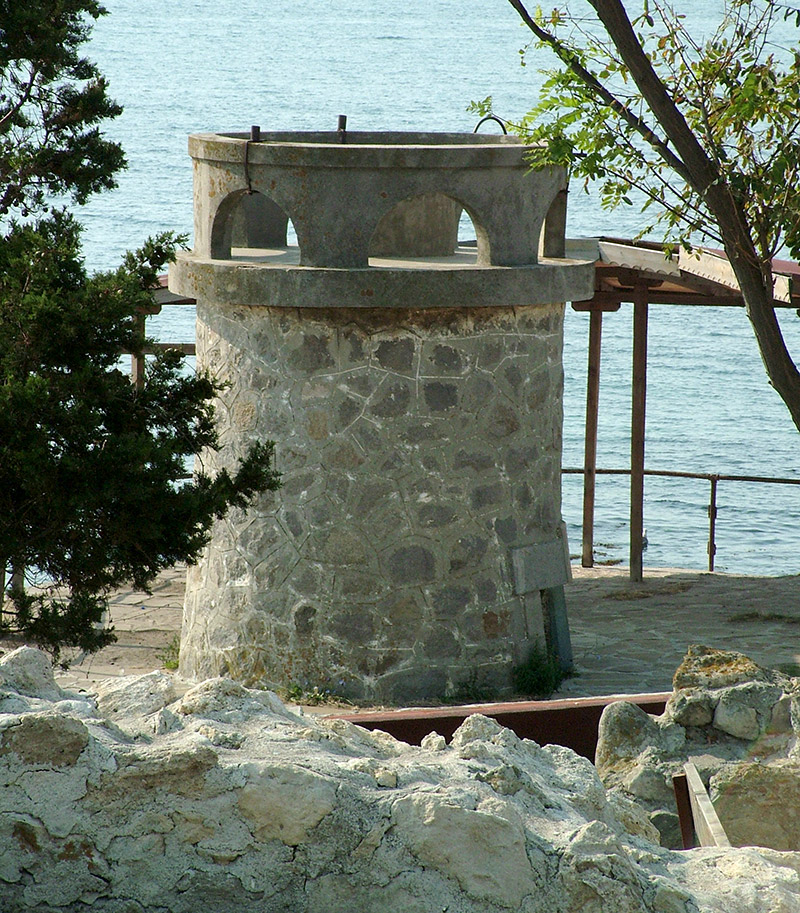 Of course, there are pseudo lighthouses on the southern Black Sea coast, too, as they attract tourists. A tall, rectangular construction in white and blue, with its own lantern room, adorns the facade of a big hotel in Aheloy. 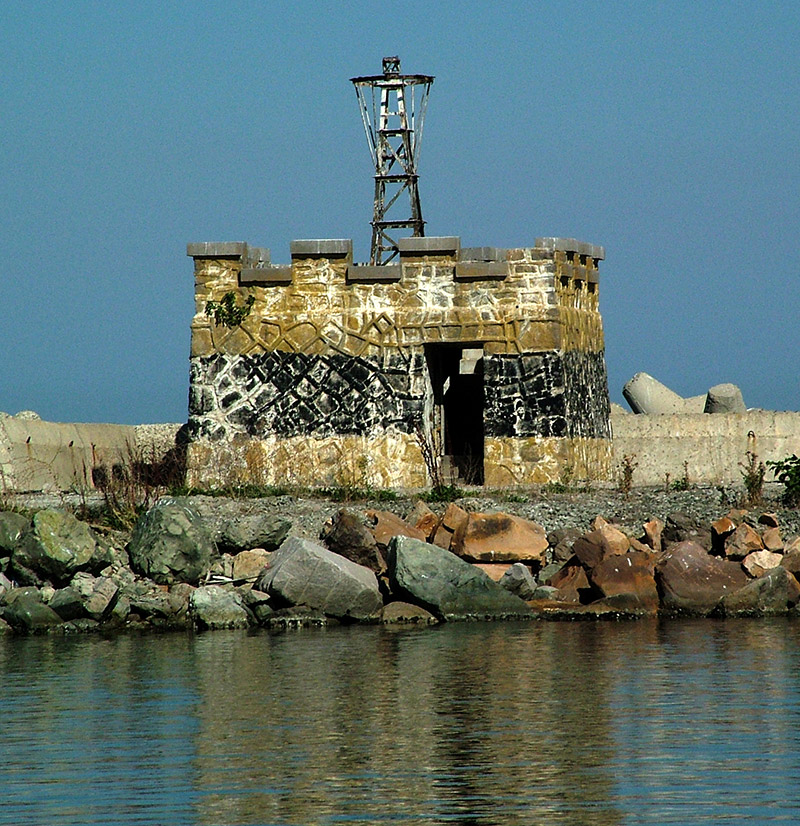 During my visit to Sozopol in 2007, I was met by the dilapidated green and red navigational aids. The two concrete towers, built in the modernist style during the 1970s, looked more like debris from an industrial landscape rather than lighthouses. Nowadays, after the modernization of the marina and to serve the increasing number of yachts, the two navigational aids have become more photogenic – painted and well-kept, accessible to be photographed during a walk, they proudly stand among the many masts in the yacht port. 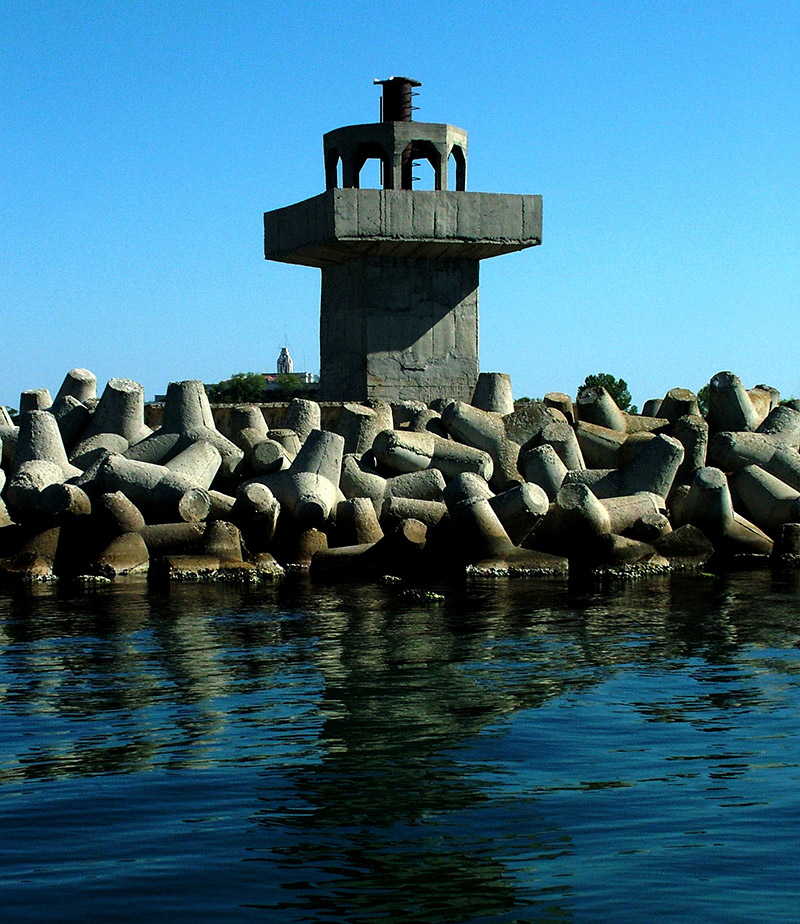 The third navigational aid in the Sozopol port area is known as “Migalkata” (The Blinkey). The automated light was installed in 1932 on a rectangular tower with metal construction on top, placed on a stone block two cables away from the pier. Nowadays, a breakwater connects this lighthouse with the shore, and the optics installed in 1973 are still in use. 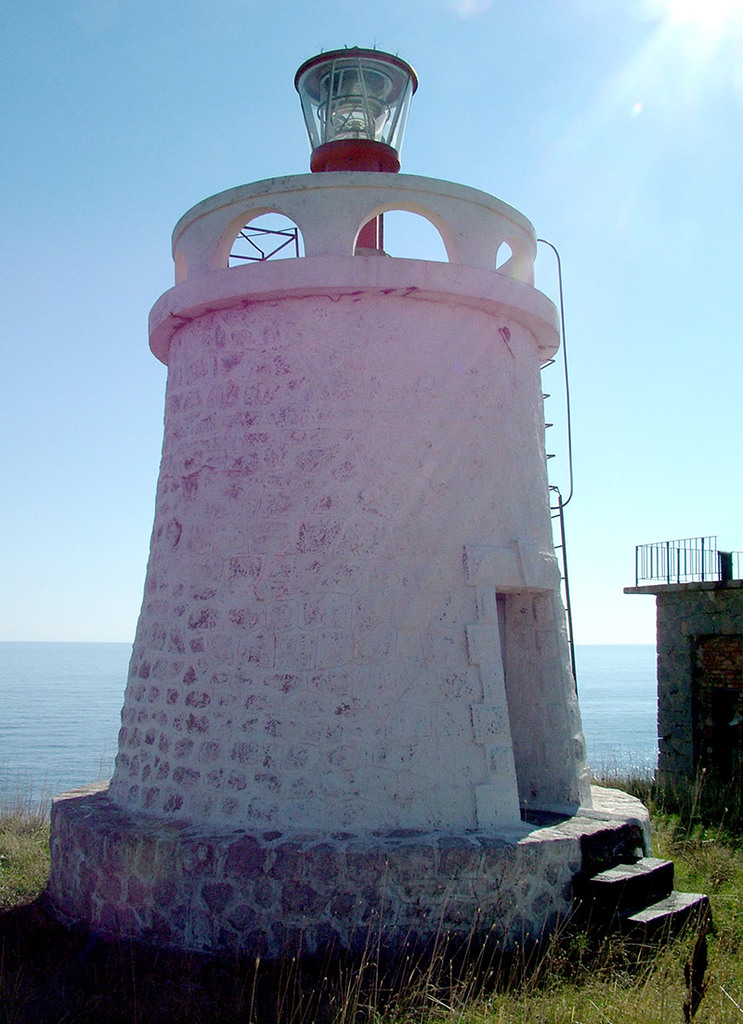 During my visit to the lighthouse at Cape Maslen, I had the opportunity to visit the Oceanology Institute of the Bulgarian Academy of Sciences, with its beautiful beach covered by a thick layer of seashells. It’s well worth a visit for the view of the rocks scattered in the crystal clear waters of the bay. There are quite a few underwater sights to explore in the region – shipwrecks with their loads lying around, remains of old fortress walls, cannons, anchors and many more smaller treasures.

The first mention of the existence of a navigational aid at Cape Maslen is from the second half of the 19th century. The currently operational lighthouse was built in 1930 – a round stone tower with a lighthouse optics. In 1937, next to it was built a rectangular stone building with a bronze bell on top. It’s used as a nautophone to replace the light’s function in poor visibility or in case of technical issues. 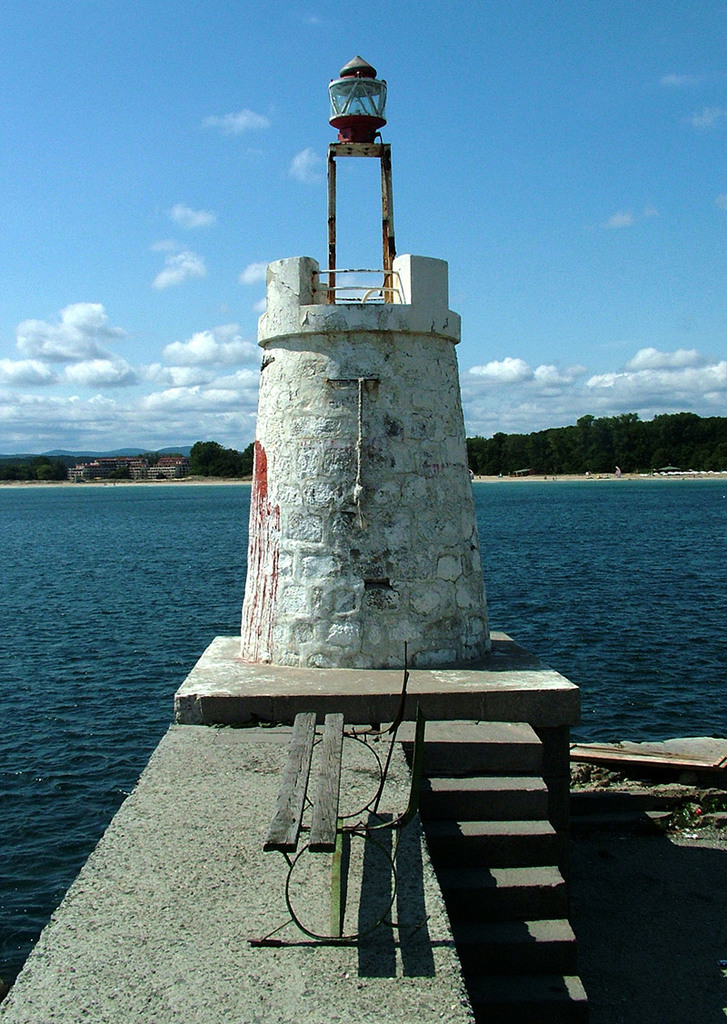 The breakwater lighthouse in Primorsko is accessible to be photographed up close. It was deployed on 13 April 1945 and started running on electricity in 1958. At that time, another base was added so that the height of the fire can be increased. There is also another navigational aid that serves local ships on the ‘Perla’ pier north of Primorsko. 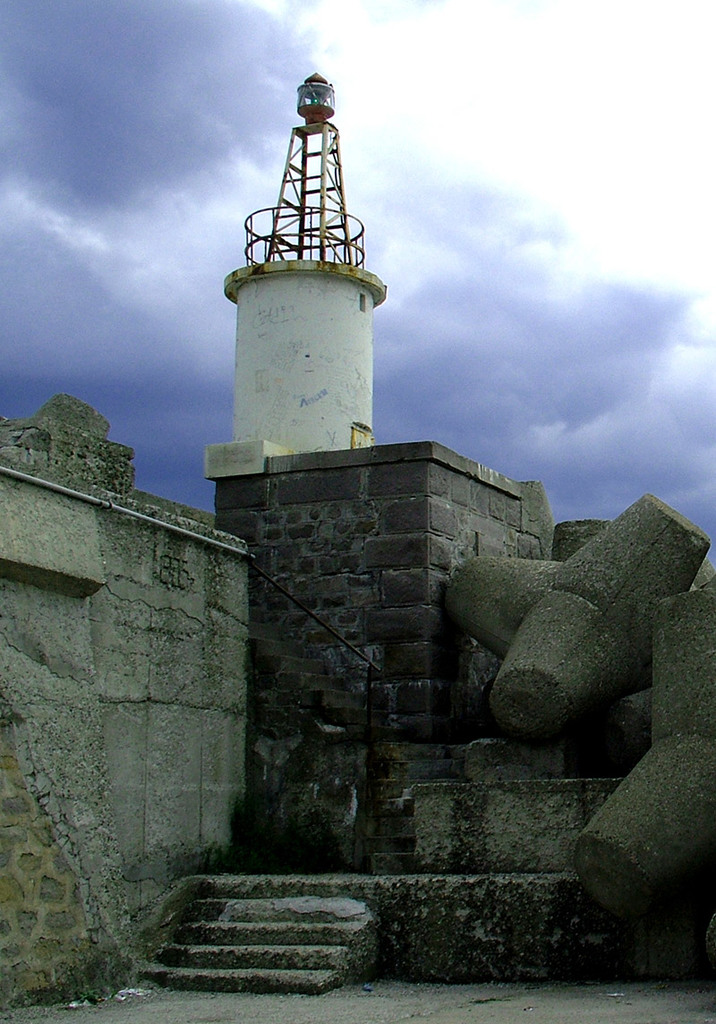 During my visit in 2007, the lighthouse at the end of the breakwater in Tsarevo was still a white cylindrical stone tower with a lattice construction on top. This tower, deployed on 1 November 1936, was destroyed by a storm in 2012. The other navigational aid built in 1929 on the rocks of the ‘Pirate’s church’ at Cape Kastro in the Vasiliko neighbourhood also perished. 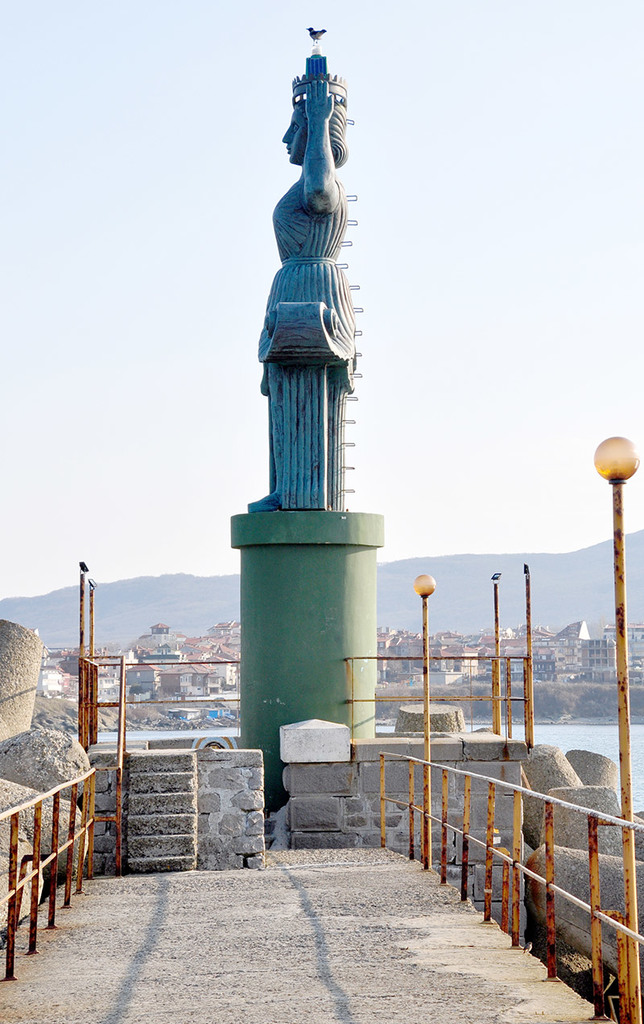 After long discussions and two years without a lighthouse, on 26 July 2014, a new one was built at the end of the breakwater. It is a bronze adaptation of the female caryatid figures found in the Sveshtari Tomb. Even before its creation, the monument sparked a heated debate because of its truthfulness, decency, price and efficiency as a navigational installation. A new navigational aid was also built and deployed on the rocks at Cape Kastro. 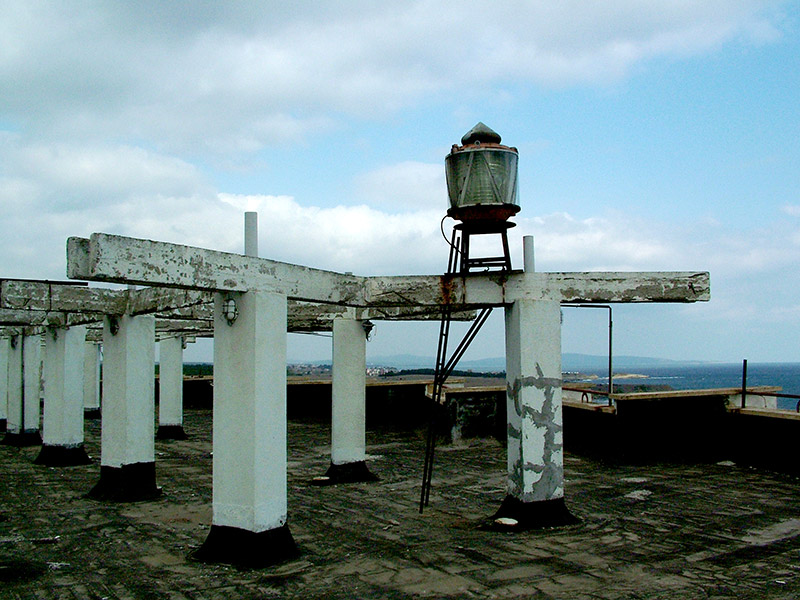 The biggest surprise during my lighthouse journey in 2007 was to find a navigational aid on the roof of a building inside the town of Tsarevo itself. It was on the roof of an old block that once used to house workers from the company Sofstroy. On a rather rudimentary installation made from a few welded L-profiles, without any type of support or protective gear, there stands the lighthouse optics. It’s fully automated and was placed in the 1980s to guide the local waters’ traffic. 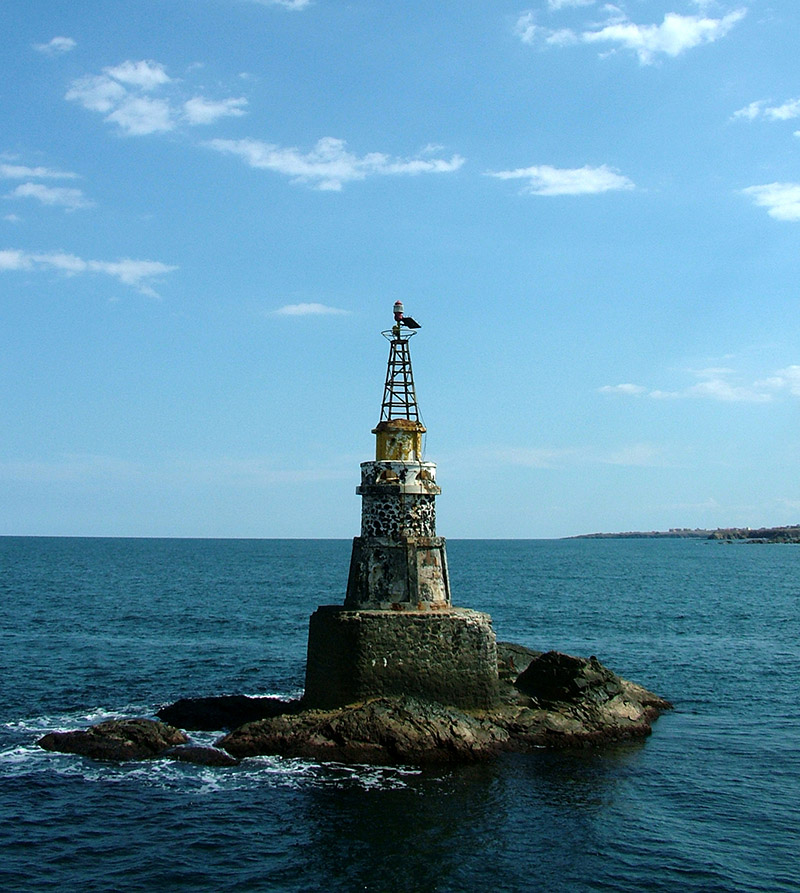 The southernmost Bulgarian lighthouse, as well as the most photographed one, is that of Ahtopol. Its location on the rocks at the end of the breakwater makes it inaccessible in stormy weather, but pretty interesting for photographers – many of whom have captured the white foam covering the tower against the bright sun or the steel grey sky. The lighthouse was deployed on 25 July 1932. Four years later the height of the fire was increased – during the winter when the waves were high, the optics was covered in ice and was not visible.

As new modern technologies are constantly discovered, some of the navigational aids along the Black Sea coast are taken out of service, which usually leads to their destruction. It’s possible that the same will happen with many of the still operational ones. Big lighthouses are most likely to continue existing as they’re needed, but if not maintained properly, they will surely be left at the mercy of the elements. In many countries, the upkeep is done by individuals who collect lighthouse tax from passing ships and use it to maintain the facilities. In other countries, the state is responsible for the maintenance of the navigational aids, and in some countries, there are even programs for their preservation as part of the cultural legacy.

My journey along the lighthouses of the Black Sea coast inspired me to do similar journeys in other countries – and I keep doing these every year to popularize Bulgarian lighthouses among the lovers of sea, history, architecture and travelling. For more than a decade, I’ve been actively trying to reach a larger audience with my book and travelling photo exhibition so that more people can get to know the magic of lighthouses and experience the excitement of connecting with that everlasting symbol – the guiding light!